When The Magical Kingdom Isn’t So Magical After All . . . 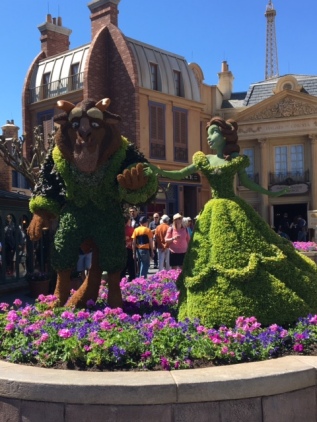 A year ago I painstakingly planned the “perfect” vacation to Disney World and Universal Studios for Spring Break. This ended up being one of my most popular blog posts that many people commented they could completely relate to. Here’s a recap of my story:

Are you a “Planner”, or do you like to “Fly by the seat of your pants”? I’m a total Planner. Thus, the inspiration for this blog. I had extensively planned for about 8 months an Orlando Spring Break vacation for my daughter’s senior trip. We had never been there as a family – so I read endless books, conducted extensive interviews and interrogations with those that had been past visitors, and combed the Internet for anything related to this magical place. This was going to be the greatest family trip we (or anyone else in history) had ever taken. This time, I was going to do everything right. No room for error. Pure joy. Every activity would be on a precise schedule – just like Robert Deniro’s character in Meet the Parents.

The trip got off to a rough start when I noticed a sharp discomfort in my lower back around 5:30 am at DFW Airport. Thought it was a cramp, nerves, or some other nuance that would go away. We boarded the flight, and those uncomfortable airplane seats were even more uncomfortable. Three hours later, I was writhing in pain – I literally started crawling on the floor of the terminal at the Orlando airport. Was this “The Big One” like Fred Sanford used to say? Was one of my major organs giving out? Appendix bursting? We found a saint of a cab driver that sped us to a close and quality ER. About 5 hours later, I had passed my first kidney stone! Okay, this wasn’t in the plans. However, the medical staff patched me up – and I was screaming in exhilaration as we rode The Everest Expedition Roller Coaster that evening. Slight “blip” in the plans, but we would hit the next few days with a vengeance. Universal Studios and Harry Potter World were tomorrow.

In spite of getting up at the crack of dawn, it seemed as though tens of thousands of other people had that same idea. As the lines allowed, we rode every ride we could between the two Universal Parks (some marketing genius out there conceived the idea of splitting up the Harry Potter World into two worlds – I would love to say it was for the benefit of the consumers, but it was so they can double their moolah intake). We were exhausted, but tomorrow was The Magic Kingdom – and I was determined to see my plans to fruition.

Our hotel was about 20 minutes away from The Magic Kingdom. They offered a “free shuttle” that left at 7 am and dropped everyone off at Epcot (which I was informed is the central hub for all Disney park transportation). Thought we’d save a few bucks and not use a taxi or Uber. Sounded perfect – The Kingdom opens at 8, leave at 7, arrive between 7:30-7:45, scan our tickets, and we would be in! Everyone had advised us to get there right as the park opens, and you can experience at least 3 major rides before the crowd hits. That advice combined with 3 Fastpasses – I envisioned myself joyfully singing, “Yo-ho, Yo-ho, a Pirate’s Life for Me!” We had the potential of enjoying 6 major rides before the clock struck noon – boom!

The trend of the majority of my plans not going as I had hoped once again began to rear its ugly head. I first became suspicious when our “shuttle” was a giant charter bus. “Wow, that’s nice of them to provide such a big bus for one hotel,” I thought in my ever increasingly fatigued, naive, and delusional mind. Even though we are not Orlando residents, after about 10 minutes we noticed, “Hey, this isn’t the route to the park.” The bus, oh excuse me – the “shuttle” literally made 7 stops at other hotels before Epcot. The driver dropped us off around 8:15 am in an empty parking lot the size of the poppy field in The Wizard of Oz. It took about a 10-minute walk to get to the Monorail. Phew, finally made it. Oh, but wait – you have to get off this Monorail and transfer to another one. Stood in line for about 15 minutes. Rumors circulated throughout the tense crowd that there was a delay.  We waited about 15 more minutes to get on a ferry headed for Disney World. 20 more minutes on the boat ride – and we finally arrived at the entrance around 9:15 am. We soon discovered that half of humanity had already beaten us to the ride (and food) lines – realizing it’s not really such a Small World After All. As the day unfolded, I soon began to fully immerse myself in the spirit of the dwarf Grumpy – along with some of his lesser-known brothers: Pushy, Pouty, and Rudey.

A few days after we returned home – I had some quality time to reflect. I then realized that one of the most important events of our trip was that crummy shuttle ride. That experience served as a great reminder of what it is like to walk with God. So many unplanned stops along the way that test my patience. Not having control over situations and just having to go with the flow. Disappointment. People getting on my nerves. Me getting on people’s nerves. Unexpected barriers and delays that get in the way of me reaching my envisioned destination.  Which leads to the question we can ask in every situation: Is my envisioned destination His envisioned destination?

Plus, I had so much to be thankful for. We were able to save up for the trip instead of charging everything. I could have been stuck in that ER for days, or possibly have had to have surgery, or it could have been “The Big One”. The family had several spontaneous moments of belly busting laughter. A ticket snafu that “entitled” us to 3 any time any ride Fastpasses at Disney Hollywood Studios. And finally, embracing every second of having lunch in Epcot Italy knowing that my daughter is only a few months away from going to college.

This trip was a continual reminder that I want comfort, control, and predictability. God offers wild, uncomfortable uncertainty – covered with many promises that He will be with us every step of the way. May your journey find you somewhere between the happy medium of planning and pants flying.

P.S. If you or anyone you know plans to interview in the near future – please check out my new book on Amazon called:  Top of the Class Teacher Interviews: 55 Strategies to Maximize Preparation and Supercharge Your Confidence. Although designed to help teacher candidates through the mental and physical preparation of the overwhelming process of an interview – it can be beneficial for anyone looking to improve their interview skills. This is the second weekend it has been featured as Amazon’s #1 New Seller in the Education Research category. Click here for instant access: https://www.amazon.com/dp/1974560686/ref

Christian, husband, father, grandfather, principal, teacher, writer and encourager. David lives in Keller, Texas and has been in public education for over 19 years. He enjoys family time, biking, reading, NFL and MLB, magic, board games, movies and making people laugh.
View all posts by David Rische →
This entry was posted in Uncategorized. Bookmark the permalink.

1 Response to When The Magical Kingdom Isn’t So Magical After All . . .

A community of readers

Out of the Darkness
John Maxwell

art, clay and some universal truth

Win at Work and Succeed at Life